MOGADISHU, Somalia (AP) — A car bomb exploded Wednesday outside the international airport in Somalia’s capital, Mogadishu, killing at least eight people and wounding nine others, a local doctor said. The al-Shabab extremist group claimed responsibility for the attack, saying it was targeting “white officials” passing by.

Dr. Abdulkadir Adam with the Medina hospital told The Associated Press about the death toll. Witnesses at the scene said a passing U.N. convoy appeared to be the target in the blast near a checkpoint leading to the heavily fortified airport, but the U.N. mission said there were no U.N. personnel or contractors in the convoy.

The al-Qaida-linked al-Shabab extremist group, which controls parts of Somalia, said via its Radio Andalus that a convoy of “white officials” had been the target. The extremist group often carries out bombings at high-profile locations in the capital.

Mogadishu’s deputy mayor, Ali Abdi Wardhere, told reporters at the scene that his own convoy had been driving nearby at the time but was unharmed. He said an investigation was underway and gave a toll of five soldiers killed and five civilians injured.

The international airport hosts the U.S. Embassy, among other diplomatic offices.

The blast occurred amid the latest period of political and security uncertainty in Somalia, the Horn of Africa nation where tensions are rising over an election that has been delayed for almost a year.

The African Union peacekeeping mission has been asked to contribute security outside Somalia’s presidential palace, where opposing armed factions supporting President Mohamed Abdullahi Mohamed and Prime Minister Mohamed Hussein Roble have been present. The two leaders disagree over, among other issues, who should be in charge of security in the country.

The president late last month tried to limit the powers of the prime minister, who called it an attempted coup. 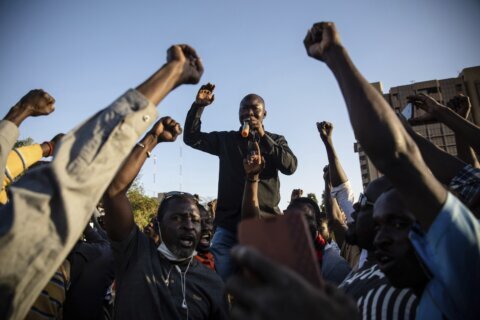 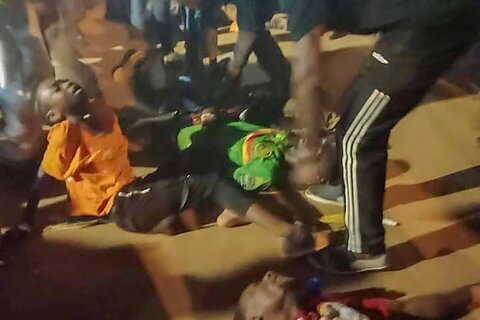