EXPLAINER: Who are the gunmen abducting Nigerian students?

LAGOS, Nigeria (AP) — The recent release of three separate groups of students who had been abducted in northern Nigeria brought joyful reunions and the hope that others still held might soon be freed.

Before Wednesday’s attack some 1,000 students had been kidnapped in about a dozen school abductions since December and UNICEF says some 200 are believed to still be in captivity.

Here is a look at what is known about the gunmen kidnapping children for ransom in northern Nigeria.

WHO ARE THE CRIMINALS BEHIND THESE ABDUCTIONS?

Government officials describe the gunmen carrying out the attacks as “bandits” but what, if any, connection there is between them remains unclear. School kidnappings have taken place in nine different states, and targets have included everyone from preschoolers to university students.

Then three different groups of hostages in three separate states — Niger, Kaduna and Zamfara — were all released within 24 hours of each other. That led some to question whether it was coincidence or a sign that these “bandits” in fact have ties to one another.

Observers have said the gunmen appear to be young men from the Fulani ethnic group who had traditionally worked as nomadic cattle herders and are caught up in a decades-long conflict with Hausa farming communities over access to water and grazing land.

Some say they took up arms because they felt their communities have been neglected over the years by the Nigerian government.

Other kidnappers, however, are simply opportunists who just want to make money from ransom payments, according to Idayat Hassan, who leads the Center for Democracy and Development, a West Africa-focused policy advocacy and research organization.

HOW DO THE BANDITS OPERATE?

Nigerian journalist Abdulaziz Abdulaziz, an editor with the Abuja-based Daily Trust newspapers, has interviewed some of the gunmen and said they have set up dozens of camps in remote forested areas of the northwest. Each houses hundreds of fighters, though one in Zamfara state where Wednesday’s new kidnappings took place, purportedly holds 2,000 followers.

Authorities believe the bandits are getting logistical support from local residents, saying some have confessed to ferrying phones, fuel and food supplies to the gunmen while they are camped in the forest. It’s believed they’ve used the money from the ransom payments to buy arms and ammunition, some of which is now more sophisticated than what is used by the Nigerian military.

BUT ARE THEY LINKED TO ISLAMIC EXTREMISTS?

Many initially believed there was a difference between the Islamic extremists in the northeast, who were motivated by ideology, and the bandits in the northwest believed to just be after money.

However, freed captives have shared details that suggest some bandits might share extremist beliefs with the Boko Haram group, whose name means “Western education is forbidden” in the local Hausa language.

Victory Sani, one of the students released in May after being abducted from her school in Kaduna state, said her captors warned her to stay home.

“They asked us not to go back to school, that they will make sure they shut down all the schools in Kaduna state,” said Sani, 20. “And if we go back there (to the school), they will still come back for us. And if they get us, we are not coming back again.”

The gunmen also told those students they were “not after our lives or our parents’ money; that they are after (the) government,” said Sani, whose father is still looking for a school where she can re-enroll and attend classes safely.

Sheikh Ahmad Gumi, a Nigerian cleric who is one of the few with access to the bandits and who has negotiated with them in the past, believes the bandits have been infiltrated by Boko Haram. He said the jihadi group is “looking for them (the bandits) seriously, trying to entice them to join their struggle.”

The governor of Niger state in the northwest, Abubakar Sani Bello, also has said that extremists now have established a camp there too. “I am confirming that there are Boko Haram elements here in Niger State; here in Kaure … They have hoisted their flags here. Their wives have been seized from them and forcefully attached to Boko Haram members,” Bello said in April. Neither the Nigerian army nor the presidency have disputed the governor’s claim.

WHY DOES THIS KEEP HAPPENING OVER AND OVER?

Schools are so sparse in the north that many parents send their children to boarding schools far from home. Even with stepped-up security, these educational facilities are vulnerable to gunmen whose weaponry has improved with each successive ransom payment. Because of the 12-year insurgency in the northeast, the Nigerian army has had far fewer soldiers posted in the areas now being repeatedly targeted by kidnappers.

After Friday’s announcement, the head teacher at Salihu Tanko Islamiyya school in Niger state said a payment of more than 30 million naira (about $73,000) had been made to secure the children’s release. Abubakar Alhassan said families came up with most of the money, and the school raised some cash, too, by selling a plot of land where they had planned to expand the campus.

Oluwaseyi Adetayo, a security expert and former officer of the Nigerian secret police Department of State Services, says the bandits have found it far too lucrative to abduct children.

“It is paying them more than what any of them could imagine they can ever earn in their life,” said Adetayo, who runs Eons Intelligence, a security advisory group. “It is an established chain of business already.” 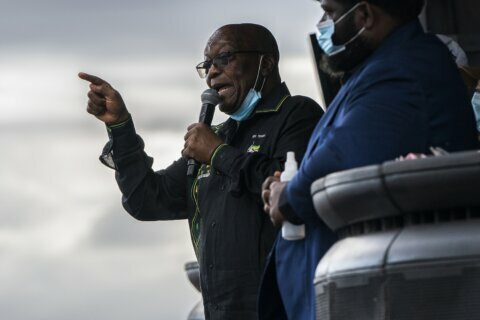