DAKAR, Senegal (AP) — Chad’s former dictator Hissene Habre, the first former head of state to be convicted of crimes against humanity by an African court after his government was accused of killing 40,000 people, has died in Senegal. He was 79.

Habre, whose case for years showcased Africa’s reluctance to put its despots on trial as he lived in luxurious exile, had recently contracted COVID-19 according to local media reports. His death Tuesday at a Dakar hospital was confirmed by Jean Bertrand Bocande, director of the penitentiary administration.

The former dictator, first arrested in Senegal in 2013, had been sentenced to life imprisonment in 2016 but ultimately served about five years in prison following his conviction.

Human rights activists say Chad was a ruthless, one-party state under Habre’s rule from 1982 to 1990. A fearsome security service headed by members of Habre’s Gorane ethnic group was placed in every village, documenting even the slightest transgressions against the regime, they said.

The list of offenses meriting arrest included speaking ill of Habre, listening to “enemy” radio stations or “performing magical rites to aid the enemy,” according to a truth commission appointed shortly after Habre fell from power. That commission concluded Habre’s government oversaw 40,000 killings.

“Hissene Habre will go down in history as one of the world’s most pitiless dictators, a man who slaughtered his own people, burned down entire villages, sent women to serve as sexual slaves for his troops and built clandestine dungeons to inflict medieval torture on his enemies,” tweeted Reed Brody, a human rights lawyer who worked for years to bring Habre to justice.

But even five years after Habre’s conviction, “torture survivors and families of the dead have not seen one penny” in compensation, Brody wrote in a piece for Human Rights Watch earlier this year.

“The African Union has failed even to establish the court-mandated trust fund to search for Habre’s assets and solicit contributions,” he said.

As Senegal confronted a dramatic rise in COVID-19 cases in recent weeks, some victims’ advocates had urged the government to make sure Habre was vaccinated, ensuring he would serve a long sentence behind bars.

“As a victim of Hissene Habre he is a human being like any other. He died — I can’t say I’m happy, but that’s his fate,” said Rachel Ndounodji, who husband was killed during the Habre regime. “But how to forgive him? We are halfway there. And how to forgive him? The victims are not yet compensated.”

Lawyer Jacqueline Moudeina, who represents victims’ families in Chad, vowed Tuesday to press ahead with those compensation claims despite Habre’s death.

For Younous Mahadjir, who was held for four months at the end of Habre’s rule for distributing anti-regime pamphlets, the overwhelming impression of the period was fear.

“At any moment they could arrest you,” said Mahadjir, who while in detention had water poured down his throat until he lost consciousness. “During Habre’s time, to be prudent, when you slept you wore your clothes, because you never knew when they might come for you.”

Detainees were subject to a wide range of torture techniques. Some were burned, others were sprayed with poison gas and still more were forced to put their mouths around the exhaust pipes of running vehicles, causing severe burning when the motor accelerated.

Habre was born the son of a farmer in the northern Chadian town of Faya-Largeau in 1942. The country was still under French colonial rule, and he worked as a civilian for the French military before being selected to study in France, where he earned a law degree.

He returned in 1971 to work for Chad’s foreign affairs ministry, but he soon became involved in a peasant rebellion of Muslim northerners against the largely southern-dominated Christian government.

His rise did not seem driven by ideology. The final report of the truth commission sharply criticized Habre’s opportunism, describing him as “a man without scruples” motivated by power alone. “Thus he would join with the armed rebellion one moment and with the government the next. To win over public sympathy, he portrayed himself by turns as a convinced Maoist and a fervent Muslim,” the report said.

In a later passage, the report said that despite Habre’s education, his “comportment and thinking are not much different from those of a camel thief.”

In 1982, Habre deposed President Goukouni Oueddei, beginning his eight years as head of state. Aware that his regime was under threat from Libya, Habre created his security service known as the Directorate of Documentation and Security, or DDS, not long after becoming president.

He received substantial support from the United States and France because he was seen as a “bulwark” against former Libya dictator Moammar Gadhafi, according to Human Rights Watch. Habre received hundreds of millions of dollars in American aid and was invited to the White House, HRW says, while support from France came in the form of arms and logistical support.

Documents left behind by the DDS highlight the extent to which Habre oversaw its day-to-day operations.

“What these documents make very clear is that Hissene Habre was kept informed of virtually everything, from the cloth being used for uniforms to the deaths of prisoners,” said Brody who discovered the documents spread across the floor of the old DDS headquarters in Chad’s capital, N’Djamena. “What we see here is a control freak, really, who was keeping on top of every detail.”

One document says the DDS was intended to serve as the president’s eyes and ears, while another notes that a facility for “very special” prisoners was placed near the presidency so Habre could keep tabs on them. The documents mention more than 12,000 victims of Chad’s detention network, indicating that Habre received direct communications concerning 900 of them.

Habre fled to Senegal after being overthrown in December 1990. For 22 years, he lived freely and comfortably even during the periods he was technically under house arrest, splitting his time between two large villas in the seaside capital of Dakar — one for his Chadian family, the other for the family he started with a Senegalese woman he took as a second wife.

All this time, Habre’s victims were working to bring him to trial and they filed a case against him in Senegal in January 2000. He was indicted the following month, but his lawyers successfully moved for the case to be dismissed, arguing that Senegalese courts could not judge someone for crimes committed in Chad.

A separate case was initiated in Belgium, and Habre was indicted there in 2005. But Senegal refused to take any action. In 2012, the International Court of Justice ruled that Senegal needed either to try Habre or to extradite him “without further delay.” In collaboration with the African Union, Senegal established a special tribunal to try Habre, and he was finally arrested at one of his villas on a Sunday morning in June 2013. Two days later, the court formally charged him with war crimes, crimes against humanity and torture.

Associated Press journalist Oliver Monodji Mbaindiguim in N’Djamena, Chad, contributed to this report. Robbie Corey-Boulet contributed reporting when he was working for AP in Dakar, Senegal. 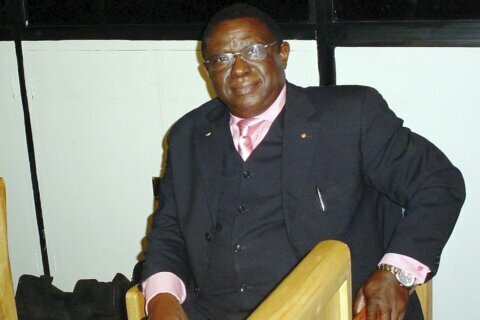