JOHANNESBURG (AP) — At a popular cafe in Johannesburg’s Soweto area, owner Benedict Somi Vilakazi liked to tell foreign visitors how nearby Vilakazi Street was named after his grandfather, who defied racial discrimination to become one of South Africa’s first Black university lecturers.

But Vilakazi is no longer there to tell the tale — he died of COVID-19 in April at the age of 57. And seven months later, as the country’s tourism slowly resumed, family members gathered to honor his memory and, following tradition, distribute his clothes to loved ones.

Vilakazi was one of the early victims. COVID-19 arrived in South Africa in early March, when 10 people who had been visiting Northern Italy returned home. One of them — a 38-year-old man — brought the virus back with him.

The news set off alarms. Experts warned of a health catastrophe because so many of the country’s 60 million people live in overcrowded urban areas.

But the country had a secret weapon: Health professionals who are veterans of the country’s longstanding battles against HIV/AIDS and drug-resistant TB. South Africa’s leaders heeded their advice on how to deal with the virus and, though there have been ups and downs, the worst-case scenarios have not yet come to pass.

South Africa swiftly imposed one of the world’s strictest lockdowns on March 27, the day it recorded its first COVID-19 death. Factories and businesses were shut, as was all commerce except grocery stores and pharmacies. Borders were closed. Sales of liquor and cigarettes were banned. Everyone was ordered to stay at home.

The lockdown was designed to buy time. Hospitals enlarged their intensive care units, field hospitals were quickly installed in convention centers and sports venues, and the country’s medical laboratories ramped up their testing capacities.

When the pandemic began, South Africa was one of only two of Africa’s 54 countries that could test for COVID-19. Health experts said testing and tracking would help contain the virus. But testing stalled because international supplies did not arrive. At one point in May, there was a two-week wait for test results, making contact tracing effectively useless.

South Africa’s testing capacity and speed gradually improved. By mid-December, the country had conducted more than 5.8 million tests and was averaging more than 23,000 per day.

In one of the world’s most unequal countries, South Africa’s poor were hurt hardest by the lockdown. Unemployment increased from an already soaring 28% to more than 40%. South African President Cyril Ramaphosa responded with a relief package equivalent to $30 billion to help the country’s unemployed.

In June, South Africa began to lift the lockdown, with predictable results.

Within weeks, cases of COVID-19 rose. At first, the disease spread most quickly in Cape Town, possibly because it is a center for international tourism — virtually all of the country’s first few hundred cases were imported from Europe. But then it took hold in the largest city, Johannesburg.

South Africa reached its first peak in mid-July, recording about 13,000 new cases per day. It then dropped steeply to about 1,000 cases per day, matched by lower hospitalizations and deaths.

The government gradually reopened the economy and, by November, business was nearly back to normal and the country reopened to international travelers, even though the number of new cases had begun to rise.

South Africa’s leaders felt they had no choice: They needed to restart the crucial tourism industry. The country’s economy, Africa’s most developed, is forecast to contract by more than 7% as the downturn caused by COVID-19 compounds the recession South Africa already was experiencing.

As the end of the year approached, the country was battling a new wave that Health Minister Zweli Mkhize warned could be worse than the first and overwhelm some hospitals.

By mid-December, South Africa had reported 1,443 cases per 100,000 population. The country accounts for more than 36% of all reported cases in Africa.

Superficially, life seems to have returned to normal. Workers are climbing back into minivan taxis to commute on roads humming with traffic. Markets and malls are busy with shoppers. Some people are again socializing at bars.

But look more closely at the lines in banks, supermarkets and post offices, where people keep a 6-foot distance. And at the city throngs — virtually everyone wears a facemask. Even the street beggars. 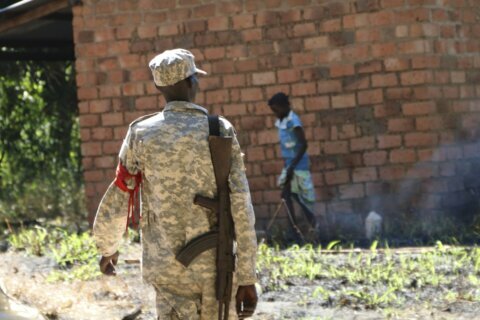