Tanzania’s leader sworn in for 2nd term after troubled vote

DODOMA, Tanzania (AP) — Tanzania’s populist President John Magufuli took the oath of office for a second five-year term amid tight security Thursday after the opposition called for a fresh election, the disbandment of the electoral commission and an “endless peaceful demonstration” over the Oct. 28 vote.

Magufuli over the weekend said he will not pursue another term amid some concerns that the ruling party, which won nearly all parliament seats, might try to extend the presidency’s two-term limit.

Police and the army tightened security ahead of the swearing-in, and the leaders of Tanzania’s two main opposition parties, ACT Wazalendo and CHADEMA, were charged with organizing unlawful assembly and demonstration.

The opposition asserts that the election was riddled with irregularities, and the United States and others have noted credible allegations that call the vote’s results — and the East African country’s democratic ideals — into question.

In his short address, Magufuli promised to fulfil campaign pledges including enhancing the lower-middle-income economy and creating new employment, especially for youth: “We are aware of the trust and responsibilities ahead.”

The president didn’t mention the allegations of vote fraud but pointed out that elections in other countries have resulted in chaos, civil unrest and long disputes. “Fortunately, Tanzanians are peace lovers and pro-democracy and we thank God for that,” he said. 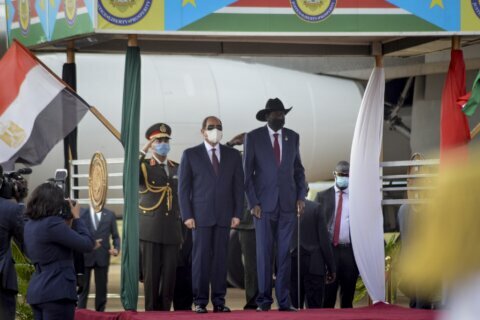