Members of the leftist opposition party Economic Freedom Fighters protested in front of the Brackenfell High School over allegations that a school graduation event was attended only by white pupils.

The protest turned violent when the Black demonstrators were attacked by a predominantly white group reported to be parents of students.

Videos circulating on social media have and South African news websites show the white adults shoving and hitting some of the Black demonstrators, shouting insults and demanding that they leave the area near the school. The groups throw stones at each other, according to images in one video.

In a statement Tuesday, South Africa’s president condemned the clashes and emphasized that anybody had the right to stage lawful protests in the country.

“It is the right of every South African to engage in peaceful protest, and any actions to suppress the right to freedom of expression, particularly through violence and intimidation, must be roundly condemned,” said Ramaphosa.

He also called for an investigation into allegations of racism at the school which led to the confrontation between the protesters and the parents.

Alan Winde, premier of South Africa’s Western Cape province where the incident took place has also called for calm and discussions instead of violence.

“Don’t resort to violence,” Winde said. “I call on citizens to be calm and to deal with these issues in a responsible manner.” 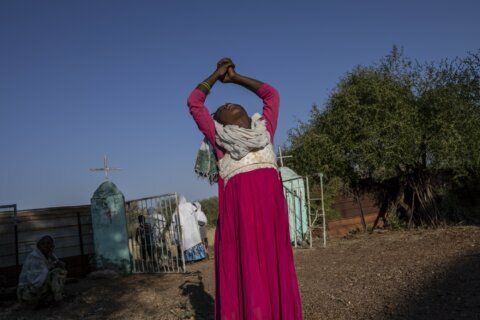