BAMAKO, Mali (AP) — A prominent Malian politician and three European hostages freed by Islamic extremists in northern Mali this week landed in the country’s capital late Thursday where they held emotional reunions with family members and were greeted by government officials.

Their freedom came just days after the Malian government released nearly 200 militants and sent them by plane to northern Mali, fueling speculation of an imminent prisoner exchange that some fear could further destabilize the country. It was not immediately known whether a ransom was paid.

On Thursday night, the son of 75-year-old French humanitarian Sophie Petronin, who had spent nearly four years in captivity, cried out to her as she made her way off the plane. He swooped her off her feet in an enormous hug, calling out “Mother! Mother!” over and over.

Three-time Malian presidential candidate Soumaila Cisse descended next in a flowing white robe and turban, embracing first his wife and then his son.

The Malian government also made a surprise announcement that two Italian nationals — Father Pierluigi Maccalli and Nicola Chiacchio — had been released by the jihadists too.

All four released hostages were then brought to a late night reception at Mali’s presidential palace where they met with dignitaries.

“I spent six months in … very difficult living conditions, in almost permanent isolation, but I must confess that I was not subjected to any violence, neither physical nor verbal,” Cisse told ORTM, Mali’s state broadcaster.

French President Emmanuel Macron tweeted that he had spoken by phone with Petronin and would greet her upon her return to France on Friday.

“What a joy to hear her voice and to know that she is now safe,” he tweeted.

Maccalli, a Roman Catholic missionary priest from the African Missionary Society (SMA), was kidnapped from Niger in 2018. Jihadists seized Chiacchio in central Mali last year, according to Menastream, an independent risk and research consultancy firm specializing in the Sahel and North Africa.

The two men were known to be held by same extremists after a video was released of them together back in April.

The hostages’ release came just days after Malian authorities freed nearly 200 jihadist prisoners over the weekend, which had fueled speculation that a prisoner exchange was imminent.

But there was a 48-hour delay between relatives of Cisse and Petronin were first notified and when the former hostages showed up for the flight in Tessalit. Malian authorities indicated their release had taken place Tuesday.

Cisse indicated that the delay was due to security conditions in northern Mali that had made it too dangerous for them to travel to Tessalit for the flight.

While there was no immediate information on whether a ransom was paid, extremists groups in the Sahel have long funded their organizations through ransom payments made by European governments, analysts say.

In March, extremists ambushed Cisse’s vehicle while he and his entourage were campaigning in northern Mali. The three-time presidential candidate was later re-elected to his parliament seat while in captivity and now emerges as the front-runner for the 2022 election.

Negotiations for his release had appeared to stall after an Aug. 18 military coup overthrew democratically-elected President Ibrahim Boubacar Keita, who beat Cisse in both the 2013 and 2018 elections. The military junta has handed over power to a transitional government now tasked with organizing elections, though the junta’s leader still serves as vice president. 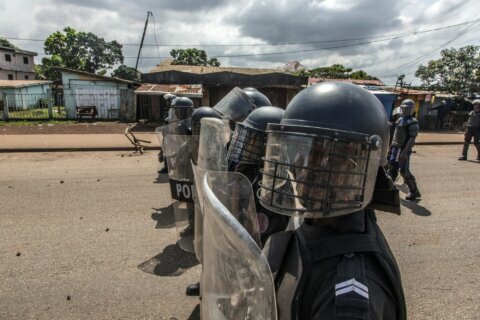