BAMAKO, Mali (AP) — Mali’s junta said Wednesday it was working to respond to the renewed demands made by West Africa’s regional bloc that the country’s military leaders announce a new civilian transitional government within a week’s time.

Questions remained, though, about whether the junta would still try to include military figures in the interim government, which then will organize a new election within 18 months.

The junta’s comments come a day after meeting with six West African presidents in Ghana, whose president is the new chairman of the 15-nation regional bloc known as ECOWAS.

Col. Major Ismail Wague, spokesman for the junta, told reporters that ECOWAS had given the junta one more week to meet the requirements or face further sanctions. Already ECOWAS has halted financial flows to the country and shut its borders.

“We are working in this direction to give a quick response,” Wague said.

Mali’s neighbors have been pushing for a swift return to civilian rule ever since the Aug. 18 coup, when mutinous soldiers overthrew democratically elected President Ibrahim Boubacar Keita three years before his final term was due to end.

The junta initially proposed waiting until 2023 to hold new elections, which would have left them in control of the country for several more years. Both sides now appear to agree on an 18-month time frame, though divisions remain on who could steer the country until a new election.

Over the weekend, junta leader Col. Assimi Goita suggested that the transitional leader could come from the military, but ECOWAS is insisting otherwise.

“We need a civilian leadership of the transition,” Ghanaian President Nana Akufo-Addo said after the summit. “From the minute that leadership is put in place,” the regional sanctions on Mali will be lifted, he said. This should be accomplished within days, not weeks, he said.

Choguel Maiga, a member of the M5-RFP opposition coalition that staged anti-government demonstrations in the weeks leading up to the coup, praised the regional pressure for civilian leadership.

However, he cautioned that a mediation commission being set up by ECOWAS to monitor the situation should be revisited, saying “it looks a bit like putting Mali under supervision.”

There has been widespread concern that the ongoing political upheaval in Mali will set back efforts to contain the country’s growing Islamic extremist insurgency.

After a similar coup in 2012, Islamic extremists grabbed control of major towns in northern Mali. Only a 2013 military intervention led by France pushed extremists out of those towns and the international community has spent seven years battling the militants.

“The terrorists are taking advantage of the situation in Mali to flex their muscles even more,” Ghana’s president warned Tuesday.

The junta’s spokesman insisted nothing had changed security-wise since the coup.

“The state continues to function, the administration is working, the partnership in the fight against terrorism continues with France’s Operation Barkhane and we continue to work with the U.N.,” Wague said. 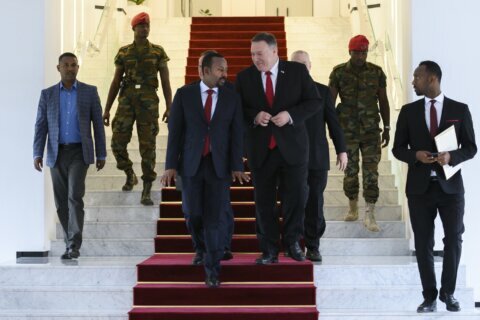