TUNIS, Tunisia (AP) — The prime minister-designate of Tunisia spelled out his plans to “save the country” ahead of a…
Listen now to WTOP News WTOP.com | Alexa | Google Home | WTOP App | 103.5 FM

TUNIS, Tunisia (AP) — The prime minister-designate of Tunisia spelled out his plans to “save the country” ahead of a parliamentary vote of confidence on his proposed government Tuesday as the North African country faces a deep economic crisis worsened by the coronavirus pandemic.

If Prime Minister-designate Hichem Mechichi wins the confidence vote, his government would be the third Tunisia has seen since October and the ninth since the revolution that brought down Tunisia’s autocratic regime in 2011 and triggered Arab Spring uprisings across the region.

Tunisia’s parliament voted down a previous prime minister-designate earlier this year after marathon debate. Lawmakers eventually approved a replacement candidate, Elyes Fakhfakh, but he stepped down as prime minister last month amid anger over his holdings in a waste processing company that won state contracts.

Mechichi, 46, is a former interior minister and lawyer who studied in Tunisia and France. He proposed a government with 25 ministers and three secretaries of state that includes seven women and a blind man. The government lineup upset some lawmakers because it includes few representing political parties.

Before the confidence vote, Mechichi said the new government would focus on “social and economic questions and respond to the urgent concerns of Tunisians.”

“The dream of a new Tunisia which assures freedom, dignity and equity has transformed into disillusion, deception and hopelessness, pushing some Tunisians to board boats of death,” he said, referring to young people who set out for Europe in search of better lives.

“The basics of a decent life, like roads, water to drink, a teacher in school and a doctor in a hospital” are not now assured, Mechichi said.

The priorities of his government include reducing public finances and restructuring state-owned companies, which are largely in debt and sucking money from a state budget that devotes 42% of funds to paying civil servants.

Like previous prime ministers, Mechichi also stressed the need to invest in the marginalized regions that played a key role in toppling Tunisia’s autocratic leader nearly 10 years ago.

Tunisia’s economy was already struggling when the virus hit, hurting the country’s important tourism sector among others. According to the National Institute of Statistics, the unemployment rate grew from 15% to 18% in the first half of 2020, and gross domestic product shrank 21% in the second quarter.

After days of tense negotiations, Islamist movement Ennahdha, which has the largest parliamentary bloc, announced just hours before the scheduled confidence vote that it would vote in favor of the Mechichi government. Some other parties have also promised their support.

If the government is rejected, the president could dissolve parliament and call a new election. 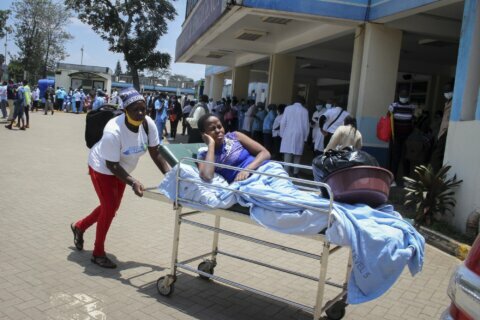