Miquidade was speaking Tuesday after a video was distributed on social media showing people in the uniforms of the Mozambican Armed Defence Force beat and then shoot dead a naked woman. The video sparked outrage and the government said it would investigate.

The video comes after Amnesty International alleged the Mozambican army had carried out gross atrocities, citing other videos showing men in army uniforms torturing and murdering people and then dumping their bodies in mass graves.

Miquidade, speaking on national televisionç suggested the country’s extremist rebels had worn uniforms identical to those of the army to make the videos.

He said the “macabre acts” shown in videos and images circulating on social media are “acts of subversion” aimed at pitting the Mozambican people against the defence and security forces.

“We want to assure you that we are in an investigative process to identify what is the nucleus, where is the nucleus where these videos are prepared,” said Miquidade.

Mozambique’s extremist insurgency began three years ago in northern Cabo Delgado province, bordering Tanzania in the north and the Indian Ocean to the east. More than 1,000 civilians have been killed, mainly by the rebels, and the total number of fatalities stands at 1,854 including combatants on either side, according to the Armed Conflict Location and Event Data Project (ACLED).

The rebels dramatically stepped up their attacks in 2020 and in August captured the strategic port city of Mocimboa da Praia and have held it for a month. Cabo Delgado province has lucrative ruby mines and massive deposits of liquified natural gas. The intensifying extremist violence threatens to disrupt the investment by international firms of billions of dollars to develop the gas projects.

Tumult at Nigeria prison after days of anti-police protests 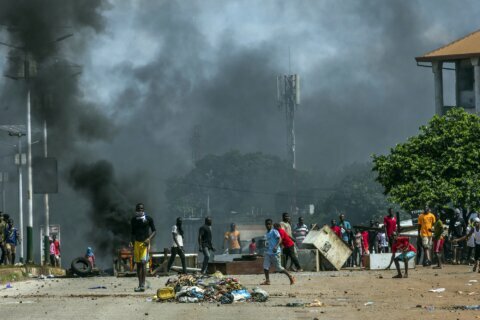