BRAZZAVILLE, Republic of Congo (AP) — The World Health Organization said Tuesday it is facing a “serious funding gap” to battle the new outbreak of Ebola in remote corners of northern Congo amid the global COVID-19 pandemic.

The $1.75 million raised so far will only last for a few more weeks, the WHO warned, adding that the response effort is particularly expensive because of how difficult it is to get health teams and supplies into the densely forested area.

Already there have been 24 deaths since the outbreak was declared on June 1. The emergence of Ebola in Congo’s northern Equateur province came just as the world’s second deadliest Ebola outbreak was nearing its end.

“The response to Ebola in the midst of the COVID-19 pandemic is complex, but we must not allow COVID-19 to distract us from tackling other urgent health threats,” said Dr. Matshidiso Moeti, the WHO Regional Director for Africa.

The funding shortage threatens to unravel early gains in this epidemic. When Equateur province last had Ebola cases in 2018, it took health officials two weeks to start vaccinating people. This time around, vaccination teams were mobilized within four days of the outbreak declaration, Moeti said.

No licensed vaccine existed when Ebola killed more than 11,000 people in West Africa between 2014-2016. After Ebola cases emerged in eastern Congo in August 2018, health teams eventually were able to combat the disease with two different vaccines.

Still, misinformation about those vaccines flourished in a region long wracked by armed militias. Communities fearful of outsiders in some cases refused to allow health teams in, allowing the virus to spread.

At least 2,280 people died of Ebola over the nearly two-year span of the epidemic in eastern Congo before it ended on June 25.

Previous outbreaks in northern Congo have been more limited — the 2018 one killed 33 people before it was brought under control within months.

Congolese health officials have determined through genetic sequencing that the new outbreak in the north is unrelated to the epidemic in the east, 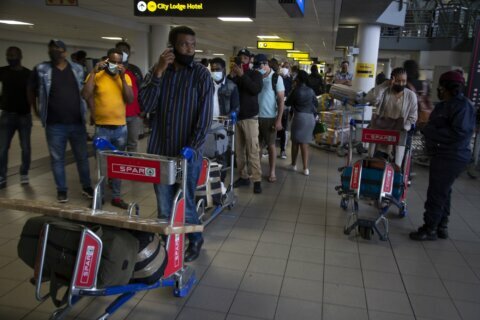