HARARE, Zimbabwe (AP) — African heads of state joined thousands of Zimbabweans at a state funeral Saturday for Zimbabwe’s founding president, Robert Mugabe , whose burial has been delayed for at least a month until a special mausoleum can be built for his remains.

More than 10 African leaders and several former presidents attended the service and viewing of the body of Mugabe, who died last week in Singapore at age 95, at the National Sports Stadium in the capital, Harare. The crowd filling about 30% of the 60,000 capacity of the Chinese-built stadium. Most of those attending were supporters of Zimbabwe’s ruling ZANU-PF party.

South African president Cyril Ramaphosa drew boos from the crowd, as a result of the recent attacks in Johannesburg on foreigners, including Zimbabweans. An official pleaded with the stadium crowd to let him speak. Ramaphosa apologized for the attacks.

Kenyan President Uhuru Kenyatta described Mugabe as “a great icon of African liberation” and “a visionary leader and relentless champion of African dignity.”

The announcement Friday evening that that burial will be postponed until the building of a new resting place at the national Heroes’ Acre Monument is the latest turn in a dramatic wrangle between Mugabe’s family and President Emmerson Mnangagwa, a once-trusted deputy who helped oust Mugabe from power.

“A giant tree of Africa has fallen,” said Mnangagwa, who hailed Mugabe as “a bold, steadfast revolutionary.”

“Go Well Our Revolutionary Icon” and “Farewell Gallant Son of the Soil” were among the banners praising Mugabe, who led the bitter guerrilla war to end white-minority rule in the country then known as Rhodesia. Mugabe was Zimbabwe’s first leader and ruled the country from 1980 for 37 years, from years of prosperity to economic ruin and repression.

He was deposed in 2017 by the military and Mnangagwa in a bloodless coup that was marked by more than 100,000 people demonstrating in Harare’s streets to demand that he step down. Following Mugabe’s resignation, Mnangagwa took power and won elections the next year on campaign promises he would improve the collapsed economy and create jobs. But Zimbabwe’s economy has lurched from crunch to crisis and some in the crowd expressed the view that life was better under Mugabe’s rule.

“Bread was less than a dollar when we marched against him (Mugabe). It is now $9,” said Munashe Gudyanga, 18. “I am just here to say ‘Sorry, President Mugabe, we didn’t know things will be worse.'”

Some in the stadium sang an impromptu farewell to Mugabe, “When you left bread was a dollar,” lyrics that implicitly criticized Mnangagwa, whose nearly two-year rule has been marked by rising prices, with inflation currently more than 175%.

The visiting leaders viewed Mugabe’s the partially open casket, followed by a 21-gun salute, a flypast by Zimbabwean air force jets and the release of 95 doves, to mark Mugabe’s 95 years.

Mugabe’s body is to be viewed in his birthplace, Zvimba, on Sunday and then will be held in preservation until the new mausoleum is ready.

In downtown Harare, many Zimbabweans were busy with their weekend errands, and expressed little interest in the funeral, which was open to the public.

“What will I get if I go there? What will Mugabe do for me now that he failed to do when he was alive?” said Amelia Tukande, who was selling cellphone chargers along Harare’s Samora Machel Avenue that leads to the stadium. “It is a waste of time. I have to work for my family.”

Others said they would have wanted to attend the funeral but cannot afford transport fares.

“I didn’t like him, but I still wanted to attend just to see for myself that he is gone … but kombis (minivan taxis) want $3.50 just to get to the stadium,” said Amos Siduna, waiting in line at a bank to get cash, which is in short supply. “That’s too much money for me just to go and say ‘bye bye’ to a corpse. Mugabe’s corpse. No.”

The mourning period for Mugabe’s death has been marked by the ongoing drama over where, when and how the ex-strongman will be buried. The new resting place will be built near the stadium at Heroes’ Acre, a national burial site for top officials of Zimbabwe’s ruling ZANU-PF party who contributed to ending white colonial rule

The mausoleum will be at an elevated site above the other graves, according to Mnangagwa and a Mugabe family spokesman.

Grace had previously insisting on a private burial rather than the state funeral and burial in a simple plot alongside other national heroes planned by the government.

“We are building a mausoleum for our founding father at the top of the hill at Heroes’ Acre,” Mnangagwa said on state television Friday night, consenting to the Mugabe family’s wishes.

Ethiopia skips latest US talks with Egypt over dam dispute 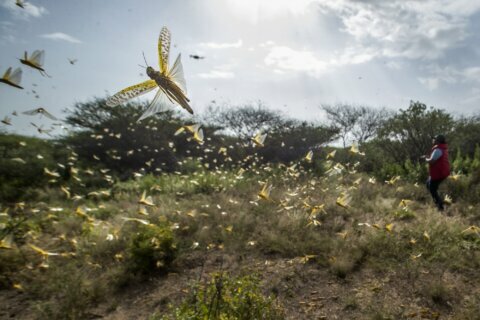