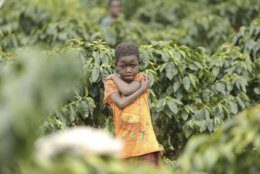 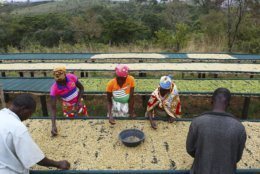 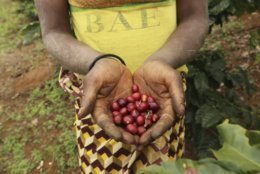 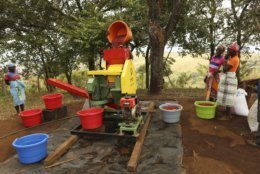 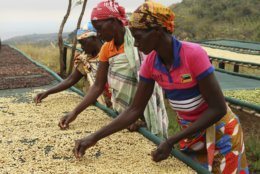 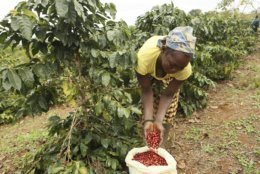 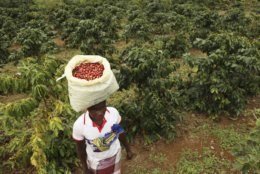 MOUNT GORONGOSA, Mozambique (AP) — A wiry woman, Querida Barequinha intently sorts through the coffee beans laid out on racks to dry in the sun, plucking out any that are cracked or misshapen.

“I like growing coffee because it earns cash that goes right into my pocket,” she said, with a darting smile. “I can buy soap, cooking oil, schoolbooks and other household items. It’s very useful.”

Barequinha has been growing coffee for four years on the upper slopes of Mount Gorongosa, where clouds frequently cover the rainforest at the top. Now that a peace agreement has been signed between Mozambique’s government and the Renamo rebels, whose military headquarters are nearby, she is planning to plant more coffee trees.

A mother of seven, Barequinha said she is encouraging her family to join her in coffee production.

“I’d love to see others in my family grow coffee,” she said, in chiGorongosi, a dialect of the Sena language. “It offers us a source of hope.”

Barequinha is one of 400 Mozambican farmers producing coffee that earns them valued cash incomes while at the same time restores the rapidly eroding rainforest of Mount Gorongosa. With peace on the mountaintop there are plans to dramatically scale up coffee production, as part of the national park’s innovative plan to boost the incomes of people living around the park as well as revitalizing the environment.

Mount Gorongosa rises 1,863 meters (6,112 feet) above Mozambique’s central plains and the tropical hardwood forest of its upper rainy regions is being stripped by local farmers who want to grow maize. Coffee is a crop that can stop that deforestation, say park experts. Shade-grown coffee shurbs produce better tasting coffee beans, so the trees are planted among indigenous trees. Areas that had been denuded of trees now boast verdant slopes of coffee trees interspersed with local trees such as albizias and other crops.

“Coffee thrives in this unique rainforest. It produces much better income than maize and it encourages farmers to re-grow the rainforest. It is a win-win development for the farmers and the environment, so this is great for the park,” said Matthew Jordan, associate director of the Agricultural Livelihoods Program of Gorongosa National Park. Coffee could produce 10 times more income than maize or other subsistence crops grown by local farmers, said Jordan.

Twenty years ago Gorongosa park was derelict as a result of the country’s devastating civil war and much of its wildlife had been poached. The park is now reviving thanks to a partnership between the Mozambican government and the Gorongosa Restoration Project, which is supported by American philanthropist Greg Carr. The organization allocates more than half of its annual budget on supporting the communities that live around the park.

The Gorongosa coffee project is ramping up its productions, spurred on by the peace agreement signed this month (August 1) between Mozambique’s government and rebels. It the past four years it has planted 40,000 coffee trees that this year produced 8 tons of coffee beans. Some 300,000 new trees will be planted this year and annually for the next 10 years, said Jordan.

“With peace we will have a quantum jump in our production,” said Jordan, gesturing to a plot of seedlings in bags about to be planted. “This will put Gorongosa coffee on the map. Our famers will get paid fair prices, premium prices for their shade-grown crop.”

There are more than 800 Renamo rebels in three armed camps at the top of Mount Gorongosa. Their presence restricted the expansion of coffee and other agriculture. But the promise of earning ready cash from coffee may entice many of them to give up their weapons and start tending shrubs, say park officials. The processing of the coffee beans could create seasonal employment for thousands of local residents, said Jordan.

Mozambique has not been one of Africa’s major coffee producers like Ethiopia and Kenya, but Mount Gorongosa’s unique climate makes it very promising. Already, international coffee giant Nespresso has shown interest in promoting the park’s coffee production, said Jordan.

The action is already evident on Mount Gorongosa, where families ford rivers carrying as many seedlings as possible, including balancing some on their heads. Hillside fields have rows of scooped out spots where coffee seedlings will soon be planted. “Coffee trees have shallow roots and do well in the topsoil here. Trees have deeper roots and fix nitrogen into the soil, so they do well growing together,” said Jordan.

Cashews, honey, pineapples, avocados, citrus and litchis are other crops being encouraged that will simultaneously boost the incomes of local farmers and enhance Gorongosa’s environment.

Short and animated, Vaida Frangene, is a vocal supporter of the park’s coffee growing enterprise.

“I started as a volunteer in the reforesting program and then I started growing coffee. I earned cash for it last year and there is more to come this year,” she said.

“I really, really like coffee because it earns money. Last year I bought new capulanas (brightly printed cloth used as skirts and scarves) and some things for the house. It was great,” she said.

“There are other things that I appreciate, too,” said Frangene. “I love the taste of coffee. I have learned new skills in growing coffee, picking coffee cherries and how to dry the beans. I have learned about the park.” 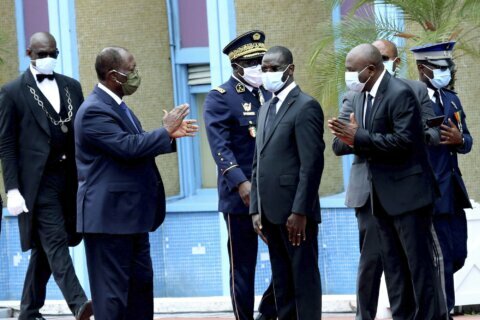 Ivory Coast president to run for 3rd term amid objections