United Nations Secretary-General Antonio Guterres has laid a wreath in memory of the 157 victims of the Ethiopian Airlines crash, including the many staff members and partners who support the world body’s work.

Guterres said they were “a mirror of the United Nations … each on an individual mission, but at the same time together, representing our larger quest — doing their part, in solidarity with all of us, to build a better world.”

Ethiopia’s prime minister says President Donald Trump in a phone call has hailed Ethiopian Airlines “as a strong institution” and affirmed the provision of technical support after Sunday’s plane crash.

The office of Prime Minister Abiy Ahmed in a Twitter post says the two leaders “shared condolences” for the crash victims. Americans and Ethiopians were among the 157 people killed in the crash.

The post also says Trump “expressed support for the holistic reforms that have been taking place in Ethiopia over the past months.” Abiy took office a year ago and quickly launched a series of whirlwind political and economic changes.

Trump has had little public contact with African leaders. Ethiopia has long been a key regional security ally for the U.S. in East Africa.

Iran says it has banned from its airspace Boeing 737 Max 8 planes alongside other nations.

The transportation ministry announced the ban on Friday. The decision comes after two fatal crashes involving the model in the past six months.

Iran has no Boeing 737 Max 8 planes due to decades-long U.S. sanctions on the country.

Ethiopian Airlines says the investigation in France has begun into the flight data and voice recorders of the plane that crashed on Sunday, killing all 157 on board.

The French agency has said it was unclear whether the data could be retrieved. It shared a photo of the data recorder, which appeared intact though the edge appeared somewhat mangled.

The pilot of the Ethiopian Airlines plane that crashed requested permission “in a panicky voice” to return to the airport shortly after takeoff, The New York Times reports.

Friday’s report cites “a person who reviewed air traffic communications” from Sunday’s flight saying controllers noticed the plane was moving up and down by hundreds of feet, with its speed appearing unusually fast.

An airline spokesman has said the pilot was given permission to return. But the plane crashed minutes later outside Addis Ababa, killing all 157 on board.

French authorities now have the plane’s flight data and voice recorders for analysis.

Countries including the United States have grounded the Boeing 737 Max 8. 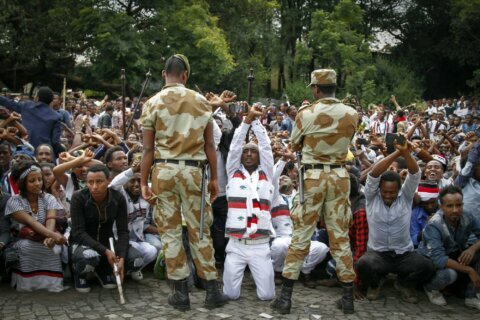